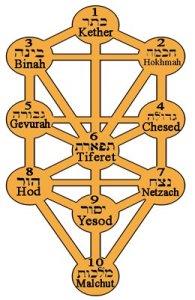 Back in 2001 by birth father introduced me to Kabbalah. At that time I had just began my path of spirituality and my father who was living in Florida was studying at the Kabbalah Center in Miami Beach.He sent me some videos and literature on Kabbalah and wow I was in love. Living in Seattle there was no Kabbalah Center so I reached out to the Kabbalah Center in LA and they sent a teacher up to Seattle and together we co created an introduction to Kabbalah Class. Right after the class ended, I quit my job and moved from Seattle to Florida to begin studying Kabbalah. There are three forms of Kabbalah that I have studied over the years Christian, Egyptian and Jewish Kabbalah. Kabbalah means to receive. It is the study of creation and shares with us the technology of how to receive endless fulfillment from the Tree of Life reality. When arriving here in Florida, I was so excited to begin studying. I went to the Kabbalah Center and began volunteering a lot. It was wonderful. The breakthroughs I received from volunteering were numerous. My father introduced me his teacher Shimon Sarfati. Though Shimon would probably disagree with me, to me he is a modern day sage. He would say that he is merely a vessel for the light force of the creator to pour from, that the wisdom is not of his own and that he is merely the messenger of the teachings that were passed to him by the late Rav Berg. Yes this is true, but the way he delivers his message is what touches the soul of his students. All the teachers of the Kabbalah Center are great as they step out of the way to be of service, but it was Shimon that shared with me one of the most profound lessons that to this day I carry with me. That to be spiritual is to be responsible not just for ourselves but for others and the world. This was so profound to me because it is one of the biggest things for a person to swallow, responsibility. The ability to respond in a proactive manner makes one spiritual and wise. I later in life came to see that when we take responsibility for our selves and other we become empowered to be co creators with the creator as everything is a manifestation of our ego so we are responsible for the good and bad in our lives. Sometimes we just can’t see the connection. Kabbalah like Ayurveda is a living system, an ancient body of collective knowledge passed down from teacher to student over the ages. Kabbalah has the Power to change one’s life by transforming one’s perspective from victim to co creator and pushing one to expand their comfort zone transforming their nature. Although I blend aspects of Kabbalah into my practice Anahata OM, I am not a Kabbalistic Sage. If you would like to experience what the Power of Kabbalah can do for you then I invite you to come meet Shimon and the other teachers at the Kabbalah Center Miami and just see how far down the rabbit hole you can go.